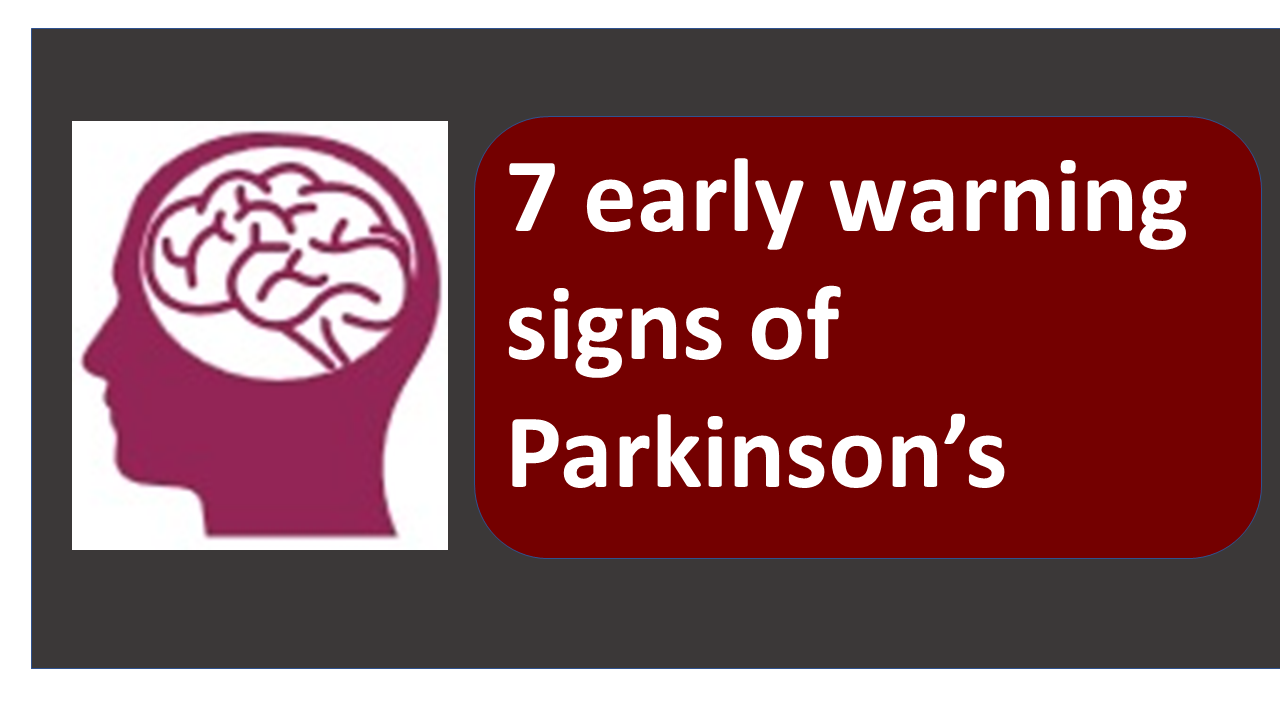 Researchers believe that tracing these Parkinson’s disease early signs is important to cope with the disease at the very early stage.

So here are the 7 most common early signs of Parkinson’s that you need to know.

It is probably the most prominent early sign of Parkinson’s and many believe that constipation could be a risk factor for the disease.

People with Parkinson’s disease are usually complaining of frequent constipation, and it is thought to be the side effects of medication. However, most people don’t know that this problem exists many years before the diagnosis. They usually considered it as a disturbance in the digestive system caused by infection or food poisoning.

In recent years, researchers have increasingly realized that there is a strong connection between constipation and Parkinson’s disease. Most researchers are convinced that frequent constipation is the indication of the death of dopamine-producing cells in the brain. Due to this fact, it now is considering as one of the useful criteria’s for the early diagnosis of Parkinson’s (1 2 3).

Low blood pressure is another key warning sign that appears in the early stage of Parkinson’s. This problem becomes more pronounced at later stages of the disease.

Although medicines used to treat Parkinson’s or other neurological diseases may lower the blood pressure, Parkinson’s itself could be the main cause of it. It is due to the fact that when Parkinson’s strikes the body, it not only affects the movement but also the body autonomic nervous system, which is responsible to control a variety of automatic functions including heart rate and blood pressure.

Several studies have shown that low dopamine levels in the brain result in the abnormal blood flow and heart rate.

The most common sign of low blood pressure is the feeling of dizziness and fainting, which increases the risk of falling and getting hurt. This is especially happening when you start moving from rest, for example getting up from bed or chair. In medical term, it is known as postural hypotension.

When people heard of memory problem, they usually think of dementia and Alzheimer’s. However, researchers have shown that this problem also has a link to Parkinson’s disease (4).

Since memory changes in the brain appear many years before the onset of motor symptoms, it’s being considered as one of the early warning signs of the disease.

In Parkinson’s, the level of dopamine is highly reduced due to the death of cells in the substantia nigra, the part of the brain responsible for movements. But substantia nigra is not the only place where dopamine is located. It can also be found in other areas of the brain including the prefrontal cortex, the part of the brain that controls the cognitive functions such as memory and thinking. When the brain is strike with Parkinson’s, the dopamine supply to prefrontal cortex is also diminished. As a result, the patient feels a problem in memory and thinking.

If you have a memory problem, it is not necessary that you have Parkinson’s or a chance to develop it. Memory problem varies from person to person. Some people recover fast while others develop brain conditions like dementia. Very few people develop Parkinson’s in such a condition.

This sign of the disease was overlooked for many years, but now it is also included among the early signs of Parkinson’s disease. Pain is a warning sign of actual or potential injury to the body and when it appears due to brain damage, it does not go away easily.

Parkinson’s disease pain could be of different types. For example, it can be a sharp burning pain, numbness, or more like an aching pain. Both burning pain and numbness result from nerves responsible for carrying movement messages from the brain; while aching mostly comes from muscles. Sometimes, the pain also arises from joints and bones. This can cause pain in the legs, arms, and shoulders.

If these different kinds of pains occur more often than not, it may be a warning sign of Parkinson’s disease.

Trouble sleeping is a common problem, however, if it’s happening more often, it may be the indication of developing Parkinson’s disease.

Sleep disorders are of various types, but the one which is strongly associated with Parkinson’s is the rapid eye movement (REM) sleep (4).

Since the eyes move rapidly in a different direction during REM sleep, therefore it’s termed as REM sleep. Other signs of REM sleep include fast breathing, increased heart rate, and shouting. Up to 40% of people with REM sleep have the chance to subsequently develop Parkinson’s disease.

Beside REM, other sleep disorders that are linked to Parkinson’s disease include sleep apnea (breathing disruption during sleep) and restless leg syndrome.

Up to 90% of Parkinson’s disease patients are reported to have a reduced sense of smell, termed as hyposmia. This problem occurs several years prior to the appearance of motor symptoms, although neglected by most people in their early stage of the disease (5).

The link between smell loss and Parkinson’s disease is not unusual anymore. Recent research has shown that Parkinson’s disease pathology is not limited to the substantia nigra part of the brain, but its origin could also be the olfactory bulb, the region responsible for the sense of smell. The evidence collected in this regard is so convening that loss of smell is now being used as one of the screening tools for Parkinson’s (6 7).

Have you ever experienced when someone asked you for going out, and you feel extremely tired and most often it takes extra efforts to join? If yes, then it’s the sign of apathy.

Basically, apathy means when you lose interest in pleasurable activities.

Apathy on its own is sometimes a common problem, if it is also accompanied by symptoms of depression and anxiety, then it may be a sign of Parkinson’s disease.

Like other early signs, apathy and tiredness are also linked with the decreased amount of dopamine in the brain. Research has shown that people with a low level of dopamine tend to avoid participating in life activities. They usually don’t find enjoyment in daily activities.

Parkinson’s disease signs are not restricted to motor impairment. There are several non-motor symptoms that appear many years before the diagnosis. We either don’t notice or we simply undermine these early signs.

The purpose of this post is to highlight those early signs so that when you or your loved one experience any of them, you better go and contact your doctor for the early diagnosis.

3 thoughts on “​Parkinson’s disease early signs you should know”