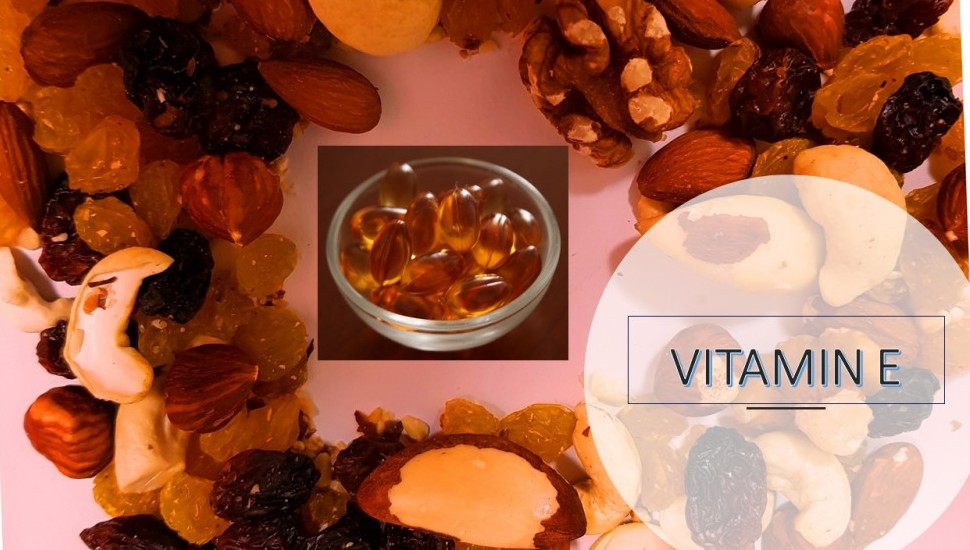 Vitamin E is a fat-soluble nutrient that possessed a strong antioxidant property. Eating sufficient amount of vitamin E is necessary for protection against many diseases. Growing evidence support the protective role of vitamin E against Parkinson’s disease. Studies on human and animal demonstrate that vitamin E has the ability to combat the toxic effects of oxidative stress, and potentially protect the brain from developing Parkinson’s symptoms.

Vitamin E – the crucial molecule of our diet

Vitamin E is an essential component of our diet. Apart from its many other functions in the body, vitamin E is involved in the proper development and function of the brain. Its deficiency has been associated with many brain diseases including Alzheimer’s and Parkinson’s (1).

Therefore, one must consume enough vitamin E in order to protect from brain diseases. Dry fruits like walnuts, almonds, hazelnuts, and leafy vegetables like spinach and broccoli are the rich sources of vitamin E. Other sources include plums, sesame seeds, wheat germ, vegetable oils, soy, and avocado (2).

How vitamin E can provide protection against Parkinson’s?

Parkinson’s disease develops when the brain lost its ability to produce dopamine due to the death of dopamine-producing cells. While the exact mechanism of how the death of these cells occurs, researchers have now confirmed that oxidative stress plays a key role in this process.

Oxidative stress condition occurs when cells generate reactive oxygen species (ROS) at an abnormally higher level. If not removed from the cell, the ROS cause damage to DNA, protein, and lipids, and ultimately leads to Parkinson’s disease (3).

To protect itself from such an insult, the cell has developed a defense system which consists of antioxidant proteins and enzymes (4).

Dietary vitamin E is a rich source of antioxidants. It has the ability to protect brain cells from damage caused by oxidative stress, and it is because of this property, many researchers think that vitamin E may have the potential to protect the death of dopaminergic neurons and slow down the progression of Parkinson’s disease (5).

Although there are many forms of vitamin E, the alpha-tocopherol is considered to be the most potent antioxidant form. Research based on pharmacological, biochemical and genetic approaches have found that this form of vitamin E has a neuroprotective ability, and therefore could be the likelihood therapeutic agent for Parkinson’s.

During the last 2 decades, studies in both animal and human have been conducted to investigate the potential therapeutic role of vitamin E in the treatment of Parkinson’s disease.

Research findings in this regard are largely limited and inconsistent. Some have presented vitamin E as a protective agent, while others have shown that it has no therapeutic property against Parkinson’s.

For example, a study performed on mice showed that α-tocopherol (a form of vitamin E) treatment for 72 hours gave protection against the loss of dopamine-producing cells in the brain (6).

This protective effect of vitamin E has also been found in cell culture experiments. In one study, dopaminergic cells from the human brain were grown on culture dishes and then treated with and without vitamin E for 24 hours. When these cells were exposed to oxidopamine (a toxic chemical that caused the death of brain cells), there was a much better survival rate of brain cells that were treated with vitamin E compared to untreated cells (7).

But in contrast to these positive findings, there are some animal studies that show no protective effects of vitamin E against Parkinson’s disease. These studies have conducted similar kind of experiments on animals brain and found no preventive role for vitamin E.

How about research studies on the human?

Human research studies also gave inconsistent findings. The very first report showing the protective role of vitamin E against Parkinson’s was presented in 1988 (8). In this study, 81 Parkinson’s patients and their sibling were asked for their consumption of the given list of fruits and vegetables. It was found that those who were frequently eating vitamin E rich food (like nuts, plums, salad oil) at their 40s were tolerant to develop Parkinson’s disease.

The similar kind of findings was also observed in two other studies conducted in 1997 and 2002 (9 10). Both studies have concluded that a high intake of dietary vitamin E is associated with a lower incidence of Parkinson’s disease.

But when it comes to clinical trials on Parkinson’s patients, the results are largely disappointing. Most clinical studies ended up with no effect of dietary vitamin E supplementation in the prevention and treatment of Parkinson’s disease.

Side effects associated with the use of vitamin E

Vitamin E is safe and tolerable. Usually, it is not associated with any adverse effects in Parkinson’s patients, when used in the recommended dose. Its high dosage can cause problems like diarrhea, fatigue, headache, weakness, and sleep problem.

Most of the research findings support the idea that high intake of vitamin E may reduce the risk of developing Parkinson’s disease. But once the disease developed, vitamin E consumption cannot reverse it. If you are a Parkinson’s patient and want to use vitamin E supplement, talk to your doctor to see if it is good for you.